We designed and built a large bamboo tunnel and designed and installed the lighting as a feature for a home in South county Dublin and we received a very nice mention about it in the Irish Times. 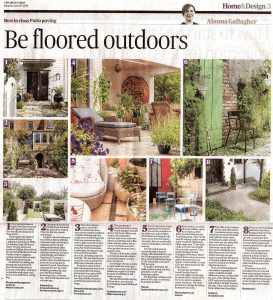 and we received a very nice mention by the Irish Times. 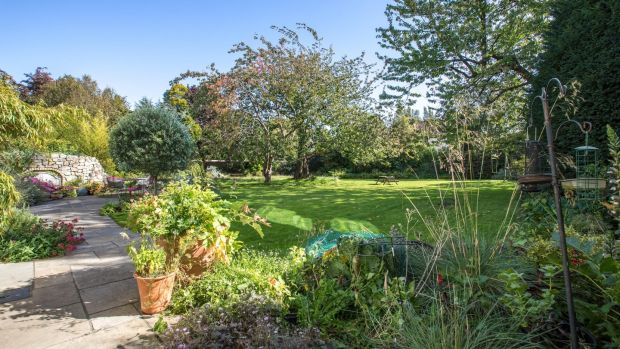 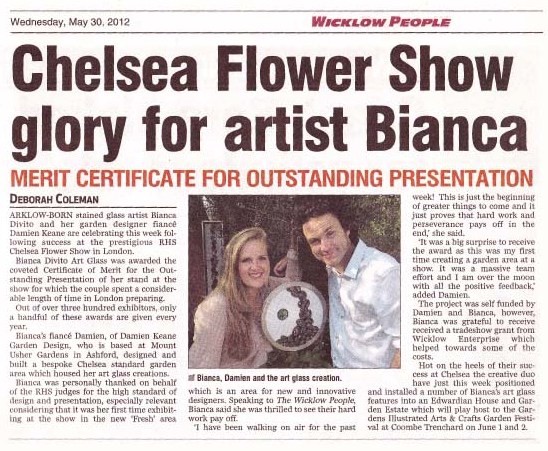 To cap it off, several Irish stands also won certificates of commendation for the high quality of their displays, including that of Houses, Castles Gardens of Ireland which was sponsored by the UK branch of Tourism Ireland. The Arklow-based stained glass artist Bianco Divito also received a certificate of commendation for her stand which was both built and designed by her husband, the Irish garden designer Damien Keane. Irish times, may 23rd, 2012

“Despite comparisons with Diarmuid Gavin, due to his early media contributions, Keane has turned his attention away from a masterplan approach and towards a hands-on, concept designs.”

“One of the most dramatic designs, The Gothic Garden, was created by Damien Keane, using dark foliage around a gothic stone window and folly ruins. In a magic touch, the church-like gazebo doubles as a consulting room, and the eagle-eyed will spot underwater gargoyles, hidden statutory and mirrors.”

“Dermot O’Neill meets one of Irelands most influential young gardeners, a man tipped to follow in the footsteps of Diarmuid Gavin.”

None of these [gardens] looks new and sparse, but rather mature and settled – all are less than three years old. Such is the mastery exercised by this young landscape designer – a rising star whose fame is growing all the time.

“However much he loves exercising his green fingers, landscape design is his first love and from the condition of some of his gardens, Damien Keane has mastered the art of making a garden look as though it had been there forever.”

“Since his exposure on TV3 last year, he has been swamped with work and has recently been asked to landscape two roof gardens, to tame an expansive wilderness in Co. Wexford and to re-design one of the larger gardens at the National Garden Exhibition Centre in Kilquade, Co. Wicklow.”

“This young landscaper is not yet thirty, yet he has projects under his belt to make him the envy of many much more senior competitors in his profession.”

“TV3 Ireland AM’s resident landscape gardener has won admirers and viewers, not least for his youth and enthusiasm, but for his knowledge and easy delivery and the continuing series of fresh ideas and solutions for small space gardening.”

“With an open mind and a little self-belief, you too can create something truly magnificent.”

“I’ll be very sad to leave my garden and my neighbours” she says. “The garden is just like a little piece of heaven”

“The transformation in the garden is, she says, “unbelievable – when Damien designed my garden he was aiming to make it an extension of my house and he has certainly accomplished that.”

“What can you do with seven acres in suburbia? Well quite a lot it seems, if you are lucky enough to have found a period garden restorer like Damien Keane.”

“I think the whole concept of gardening in Ireland needs a good kick up the ass – there just isn’t enough passion and enthusiasm.”

“Like the gardeners of old, Keane is a hands-on man, who not only designs the gardens, but wields the tools and gets the muck under his nails. When I rang him to arrange the interview he was standing in three feet of water.”

“He certainly does what he says [he can do], and if I had the period house, untended acres and matching wallet I would hire him without any hesitation.”

“At only 28 years of age, Damien Keane has already left an indelible mark on the landscapes of South County Dublin, with his garden design and restoration work looking as naturally aged and beautiful as the period houses of his well heeled customers.”